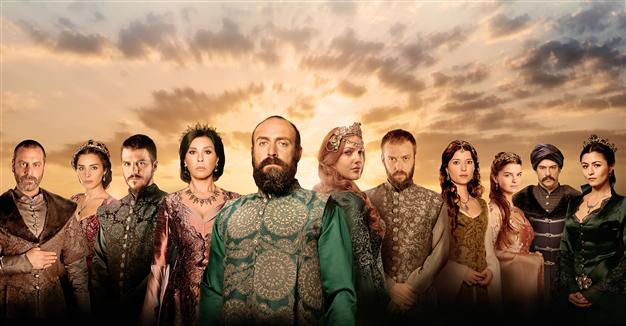 Erospolis has had enough of Ottomaniacs who confuse fact and fiction, as well as the elitist historians who are only too eager to scan Ottoman soap operas to take umbrage with the details

“How dare Hollywood portray Anne Boleyn, the brave and intelligent mother of Elizabeth I, as a hysterical slut who slept with her brother?” said Queen Elizabeth II. “I ask all patriotic British people to boycott the movie and I ask the producer to take steps to correct this shame committed against our proud ancestors.”

“We regret that the movie ‘Desiree’ includes a scene where the matriarch of the Swedish Bernadotte Dynasty, Queen Desideria, smooches at the age of 15 with Napoleon Bonaparte, then an insignificant Jacobin general,” announced the Swedish Embassy in a statement. “Our Crown Prince, aided by the Constitutional Court and Royal Legal Counsel, will take legal action against this historical error.”

Of course the above is pure nonsense. They did not. Nor are they likely to. Unlike the dystopian universe of Ray Bradbury’s Fahrenheit 451, where the characters in the wall-sized TV screens are called “family,” most people can distinguish between fact and fiction on TV.

That is why I am amazed that fanatical Ottomaniacs and elitist republicans in Turkey are getting hysterical over historical soap operas in general and the new TV series “Magnificent Century Kösem Sultan” in particular.

The (renewed) controversy comes in the wake of a new Ottoman soap opera, “Magnificent Century Kösem Sultan.” A  sequel to the prime-time “Magnificent Century,” which captivated the Turkish public between 2011 and 2014, “Kösem” picks up intra-palace intrigues 24 years after Süleyman the Magnificent’s death, this time around the life of Ahmed I and his Greek paramour Kösem, the former Anastasia.

“Kösem” became a trending topic as soon as it hit the screens earlier this month. The reactions were divided – ranging between “everything we waited for,” to “so boring that I couldn’t watch it after the first five minutes,” “historically wrong,” “the crown prince looks sooo effeminate” and much more…

“This is not Ottoman history,” tweeted Sevda Türküsev, a pro-Justice and Development Party (AKP) journalist. “Décolleté, bows, crowns – what they are trying to do is to turn the Ottoman dynasty into Christian royalty. The Radio and Television Supreme Council (RTÜK) should ban this soap opera.”

Özlem Kumrular, a historian with several books on the Ottoman Empire and one on Kösem, told Radikal that Beren Saat, a young Turkish actress with several successful roles to her name, “was no Kösem.” (Does Anne Boleyn’s portrait in the National Portrait Gallery look anything like Natalie Portman?)

Add to this chorus Abdülhamid Kayıhan Osmanoğlu, the grandson of Ottoman Sultan Abdulhamid II (r. 1876–1909), who has said his family, or at least part of the numerous Ottoman royals, had agreed to sue popular TV dramas if they “insulted” their ancestors. In the past, Osman Selaheddin Osmanoğlu, an older member of the family, had said that while he disliked the way his ancestors were represented in highly rated soap operas, he stopped short of saying that they’d sue. “It is only a fictional work,” he said at a time when then-Prime Minister Recep Tayyip Erdoğan had condemned the soap opera for misrepresenting the Ottoman Empire.

Sarcastic tongues may wonder whether Mr. Kayıhan Osmanoğlu’s suggestion of legal action had anything to do with boosting the sales of his upcoming book, which, as he put it, “would set the record straight” on the life and times of his dynasty.  Some other members of the family are also writing similarly themed books.

All this much ado about nothing on Ottoman series and Turks’ growing obsession with “anything Ottoman” are becoming a bit too suffocating.

It started innocently enough: a book of sad princesses by Kenize Murat, a Paşabahçe coffee tray with the scene from the Golden Horn during the Ottoman Empire and a reference to Ottoman influence zones in a book called “Strategic Depth” by a then-obscure academic aiming for some career as a political adviser...

My generation, the Ankara-based children of the Ottophobes, were taught at schools that the 600 years of Ottoman rule had more to be ashamed about than proud; thankfully, Atatürk came to put an end to those half-mad brother-killers, who were ruled either by their wives or by foreign powers. By the age of 11, I had visited Atatürk’s mausoleum about 10 times and had never set foot in Ottoman palaces, though I had been to Versailles and Buckingham Palace.

It was my generation’s fate to see the tide turn. By the time I reached my 30s, the previous generation’s Ottophobia had turned into a full Otto-craze; with names, symbols and perceptions of the empire everywhere: neo-Ottoman coffee sets, “jazz at Les Ottomans hotel,” trendsetters wearing caftans to the beach and anything on a canvas with a sultan’s seal on it, particularly if signed by İsmail Acar. The offspring of the Ottoman family (no longer considered the children of the collaborators) were asked to pose for covers and talk in documentaries on the Ottoman dynasty; Ottoman studies – both historical books and biographies – flourished and state TV, encouraged by the fact that Balkan and Middle East countries bought the series “Magnificent Century,” started two Ottoman soap operas, including a Ottoman-style Sherlock Holmes.

“It is a billion-dollar brand that extends to many sectors,” says Nilgün Gürkaynak, an academic at İzmir Ekonomi University, who also has hands-on business experience on brand management. “the Ottoman brand now extends to construction in the form of palace-style residences, “Ottoman color” wall paint and fabrics, anything that has to do with the art of the table, jewelry such as Hürrem rings, Ottoman-style coffee machines... you name it and there is an Ottoman version of it.”

And like any other brand, it needs to be protected and glorified. From the president down to the Ottoman Association (Osmanlı Ocakları), the supporters of Recep Tayyip Erdoğan seem intent on doing so.

“There are thousands of protests against this show which shows Ottomans in a bad light,” said the association on its website. “It would be very difficult to control the outrage if RTÜK or the Culture Ministry does not stop it.”

The fierce protection resembles what the past decade did to Atatürk: say something that hinted that Atatürk was anything but superhuman and you were banned, sued and booed. Can Dündar’s film on Atatürk, titled “Mustafa,” which said Atatürk had endured health problems ever since his years at the Military Academy, faced widespread protests and barely escaped legal action. How dare you show Atatürk as a sick man?

To confuse it further, historians are also intent on pointing to inaccuracies: “The soap operas are filled with love scenes, not historical facts. The series is filled with errors. Why not use historians as consultants? Or leave history to historians?” asks Kumrular, who has just written a book on Kösem based on historical documents.

There seems to be no shortage of Ottoman history on library shelves for those who want to read the facts. So how about leaving soap operas to scenarists?