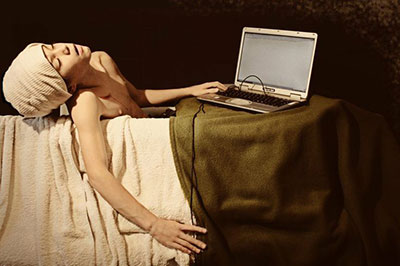 The interpretation by Ant Aksan focuses on the futility of the revolution and the continuity of repression: The actress, Ayşegül Sünetçioğlu – mad, outraged, dangerous –knows that torture has not been abolished and that the same enemies of 1793--war profiteers, religious bigots, and capitalist overlords--also prosper in 1808. The audience is reminded that much holds true over time.

Private theater in Izmir gives me mixt feelings. I have seen some excellent plays - i.e. Han Theater - and some very, very bad ones. In one amateurish performance, the woman sitting next to me, a prof of theater in one of the local universities, started laughing hysterically throughout the first act and then cried at what she called “a shameless assassination of  the art of acting” throughout the second.  We, amateurs who lack this level of commitment to stage arts, simply left before the end of the play, pledging never to come back to that theater.

That is why we had minimal expectations as we headed for a café-theater at Sardunya Bar, at Izmir’s bar district. One-woman-plays are always risky business, particularly when it is a play within a play, supervised by author Marquis de Sade, about the death of  French revolutionary Jean-Paul Marat in 1793 and supposedly performed by inmates of the Charenton asylum in 1808.

The 1963 play by Peter Weiss, “The Persecution and Assassination of Jean-Paul Marat as Performed by the Inmates of the Asylum of Charenton under the Direction of the Marquis de Sade” usually shortened to “Marat/Sade” is a complicated one. The 1967 movie’s cast strong Shakespearean actors such as Ian Richardson (Marat) and Glenda Jackson (His murderer Charlotte Corday) – and even then, had no popular success.

Yet, this complicated play that gives a bloody depiction of class struggle and human suffering had been condensed into an one-hour play where a young actress,  Ayşegül Sünetçioğlu, has switched between the fierce and ever-itchy Marat, acid-tongued Marquis de Sade and Charlotte Corday, the naive and girly murderess.  Sünetçioğlu, her face a toil of ever-changing emotions, her body an automoton of scary gestures, gives an eerie performance that should not be missed. Born in 1984, Sünetçioğlu is currently working as actress and trainer with the Bornova Town Theater.

The play “Sade/Marat” has been the subject of many interpretations since in 1960’s. In 2011, the Royal Shakespeare Company has staged it with Marat as a modern laptop revolutionary and Charlotte Corday wearing terrorist garb. In this particular version, the asylum boss presides over the event, controls the inmates by means of a smartphone. A 2000 production in New York plays around the melancholy of Charlotte Corday and a sense of futility.

The adaptation by Ant Aksan focuses on the futility of the revolution and the continuity of repression: The actress, Ayşegül Sünetçioğlu, – mad, outraged, dangerous –knows that torture has not been abolished and that the same enemies of 1793--war profiteers, religious bigots, and capitalist overlords--also prosper in 1808. The audience is reminded that much holds true over time.

This is the power of the play. The Praxis Perform, a young group of actors, say that the play is their babyand they will perform it between October 18 and 25 in Izmir. Remains to be seen whether it will go beyond the city.

A few links for those who want to catch a glimpse: