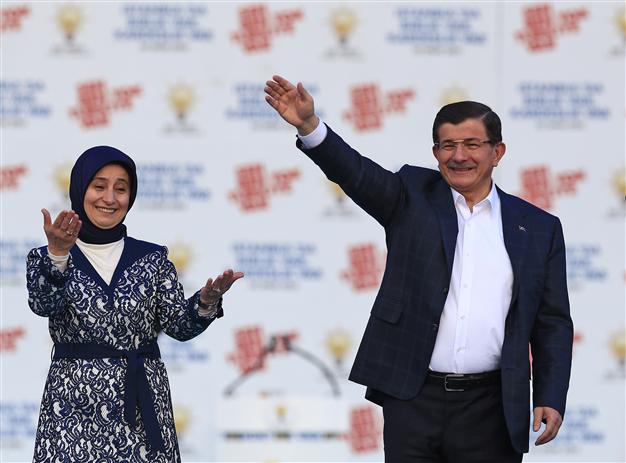 Too bad that Mr Davutoğlu left his post without realizing his electoral promise of match-making!

I spent at least two decades of my life listening to friends, colleagues and chance acquaintances promising to find me the perfect man. The perfect man they promised to introduce me to, alas, often turned out to be a hopeless womanizer, a power-hungry workaholic, a pseudo-intellectual with a huge and permanently damaged ego, or a post-andropausal couch potato... After endless first dates, not to mention feigned headaches to ensure a short evening, I gave up.

But the future generations need not go through this bitter experience. The prime minister himself, with 20 odd years of excellent marriage and a long list of delivered promises behind him, pledged right before the elections that he would help desperate singles tie the knot.

“If your parents cannot find you a decent person to marry, come to us and we will find you a spouse,” he said in Şanlıurfa, a province in Southeast Anatolia where 78 percent of the marriages are made between young people before the age of 24, including 4 percent before 14, according to official figures by the Family and Social Affairs Ministry from 2011.

Delighted that future generations would get state aid in matchmaking, I called up my friends and beseeched them to vote for the prime minister and his Justice and Development Party (AKP). I even gave a call to those friends who were involved with men I did not particularly like.

“Vote AKP,” I told them, “Vote AKP. After all, where was social democracy when you were alone night after night without a wedding ring around your finger or when you shacked up with a total louse?”

I reminded my friends that once the ruling party commits to getting you a spouse, the possibilities are endless for your picking. Loyal bureaucrats who kick the relatives of the people who died in the Soma mining disaster, ministers with a taste for high living and gifts of expensive watches, brilliant speech-writers who are responsible for the pearls that drop out of the prime minister’s mouth, youthful politicians who read papers from cover to cover and threaten journalists, as well as many other decent, devoted would-be husbands would be available.

But my misguided friends were not having any of that: Various single friends in İzmir said they were both angry and insulted that PM Ahmet Davutoğlu did not repeat the same promise in his meeting in İzmir on Friday.  Didn’t he think that girls and boys in İzmir deserve the government support in finding the perfect spouse? Or was he implying that the AKP thought there were no decent potential spouses in the city? İzmirians, already angry over the closed roads during PM Davutoğlu’s rally under the rain, were not in a buying mood.

Other friends were focused on details on how this public matchmaking worked. Would a new section be added to the famous e-public website (e-matchmaking)? And could you apply there just like you apply for your retirement or social security? Was privacy guaranteed? Could you apply more than once?

Others were worried by the catch-phrase of the PM that you had to go to your parents first. Did that mean that you could only be an eligible candidate for state matchmaking after exhausting all other methods – namely, arranged marriages which, again according to the Family and Social Policies Ministry, make up 51 percent of all marriages, including 8.9 percent where the person who will marry is not consulted?

Another friend wanted to be sure that the same offer stood for same-sex marriage. I assume it does, as our constitution makes it clear that you cannot discriminate based on sexual preferences and that Mr. Davutoğlu already made overtures to various gay and lesbian associations by sending them letters before the elections.

For those who have not followed the rise and fall of the PM’s image, Mr. Davutoğlu’s remarks in his political career have indicated that he is always fond of matchmaking. Besides teasing unmarried journalists on “the importance of the family,” he was also known to gently encourage unmarried ambassadors to tie the knot in his days as Turkey’s foreign minister.

But the latest remark, which was the last in a long series of blunders, immediately put the country in a mocking mood. “He is unable to perform as a prime minister, so perhaps he can try matchmaking as a career by appearing on matchmaking programs on TV,” said Selahattin Demirtaş, the co-leader of the Peoples’ Democratic Party (HDP).

Republican People’s Party (CHP) Istanbul Deputy Eren Erdem gave a question motion to Parliament. “Will you establish an Emotional Affairs Ministry that will push for a zero-problems policy with the couples you have helped?” he asked in an oh-so-nasty dig at the ex-foreign minister’s policy of “no problems” with neighbors policy, which somehow changed into a recipe for “no friends at all.”