TURKISH NATIONALISTS TURN A NEW PAGE IN THEIR IMAGE 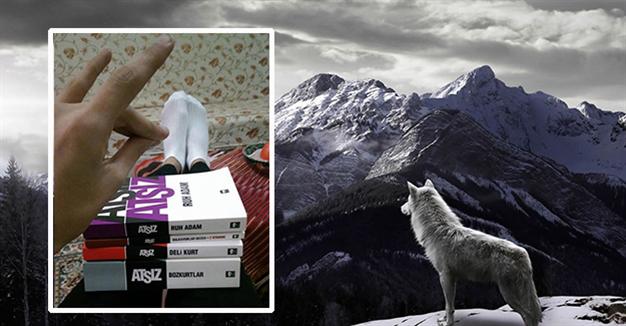 Turkish nationalists turn a new page in their image

A pensive figure with white socks and nose in buried in a book... No, it’s not Audrey Hepburn in “Funny Face,” a 1957 Hollywood classic, or Michael Jackson re-reading “Peter Pan.” It’s the new face of Turkish nationalists…

At least, that is what the “White Socks Movement” and the “Idealist Hearts” (Ülkü Ocakları), which has organic ties to the Nationalist Movement Party (MHP), aim to achieve through two separate initiatives.

The “White Socks Movement,” which first emerged around a month ago on Facebook, takes direct aim at MHP head Devlet Bahçeli, who opposes both coalitions and the wearing of white socks with equal venom. The new group, which uses white socks as a symbol of rebellion against the leader of their party, says Bahçeli’s policies have alienated the public.

“By focusing on mere appearances, we have lost our public support to the Justice and Development Party [AKP]. What is wrong with white socks? The people of Anatolia wear white socks, as they think it is a symbol of cleanliness and godliness,” said one supporter.

The group’s Facebook page has achieved 5,000 followers in 15 days, with several members posting photos of themselves wearing white socks. MHP HQ responded earlier this month, saying it was more than happy with the movement. “This way, they have revealed themselves,” stated Bahçeli, who shows no sign of abandoning his stronghold over the party.

Meanwhile, the Idealist Hearths Education and Culture Foundation has expressed no opposition to the MHP leadership, but simply wants to recast the image of a “young nationalist” as someone who reads - rather than the current negative image of someone who stages angry demonstrations.

Lest one doubts the credibility of its initiative to get young nationalists reading, the announcement by the Idealist Hearths Istanbul head Ahmet Yiğit Yıldırım was accompanied by photos of children and young people obediently sitting with their backs against a wall, reading books with a rare serenity.

The Idealist Hearths website says the reading initiative, “which has been going on for some time,” will continue with the selection of a “Book of the Month” every month to ensure that there is maximum participation.

One would hardly expect the Idealist Hearths to award their Book of the Month to popular author Emrah Serbes (whose book “Quick Losers” includes a particularly funny short story on nationalists), Orhan Pamuk, or Erica Jung’s “Fear of Flying.” Indeed, this month’s favorite is Nihal Atsız’s “Ruh Adamı” (Soul Man). Atsız (1905-1975) is deeply admired by Turkish nationalists, to the extent that an Atsız Movement was found in 2012. Atsız, a writer and poet, was a supporter of the pan-Turkist ideology but never entered active politics. He was anti-Jewish and anti-communist, though his “Soul Man” is a complex psychological novel based around the character Lieutenant Şeref, who symbolizes “honour” as his name “Şeref” means in Turkish. The book is rather more neutral in terms of ideology than his other novels such as “Night of The Sycophant” or “Vitamin Z.” The latter, for example, is about a fictional special vitamin that gives immortality to a dictator and his government. Perhaps it could be next month’s Book of the Month?

Not totally devoid of the MHP’s “leadership tradition,” the Idealist Hearths announced that there would be a quiz on each Book of the Month and the winners would receive their prize from a key MHP figure.

As one would expect from the keyboard-happy Turks, the initiative came under fire on social media as soon as it was launched. “The nationalists who decided to go to the ATO Book Fair in Ankara to buy books ended up in the zoo,” wrote one joker, referring to a cruel but deliciously funny episode when nationalist demonstrators mistook the Dutch Consulate for the Russian Consulate when they wanted to protest against the Russianboycott of Turkish goods.

“Start with the word ‘atlas’ and try to memorize the flags of the region,” joked another user.

“What, nationalists read? Whatever happened to just burning books?” said another tweep.

Indeed it’s fair to say, the caricature image of a Young Grey Wolf could use some polishing. This was exactly what Bahçeli tried to do after he took over the party back in 1997. “Young Grey Wolves will have computers, not guns,” he famously said. Given the substantial presence of Young Grey Wolves on social networks, and the abundance of “ülkücü” hashtags, this looks like one piece of advice they have taken to heart.

Bahçeli’s “directives” also extended to nationalists’ appearance. Several leaked memos showed nationalists were asked to “shower every day, not to use strong scents, not to carry prayer beads, or wear white socks.” He also urged the Young Gray Wolves to avoid howling like a wolf when excited.

However, recent blows to the image of young Idealist Hearth members tend to come from their actions rather than their appearance. Stories of Young Grey Wolves mistakenly beating up Koreans in protest against Chinese policies toward Uighur Muslims, or gathering in front of an empty house to protest an actress for alleged pro-Kurdish sympathies, has led to a rich new vein of “Gray Wolves jokes.”

One great one is about two young men who go into a shop and ask for two loaves of bread. “Are you from the Idealist Hearths,” asks the shopkeeper. “How do you know?” they ask. The shopkeeper replies: “Because this is the ironsmith.”

As for the new reading initiative, despite many people inside and outside the MHP who support it, reading - like thinking - needs to be done with an open mind and with broad skepticism. Otherwise, it simply becomes a way to reinforce prejudice. Anyway, let’s see what the next Book of the Month will be.

Published in the Hürriyet Daily News in January/28/2016