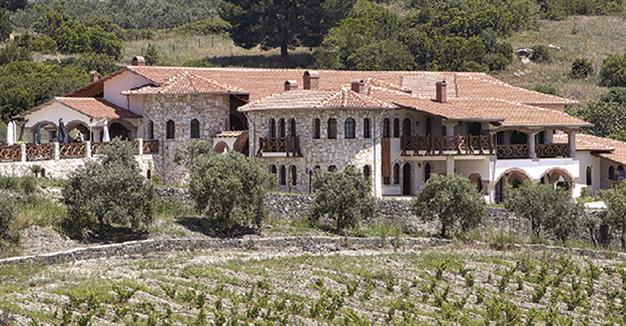 Yedi Bilgeler vineyard in Selçuk, with a sophisticated cuisine and wine-making facilities, aims at international recognition.

“If your taste runs into complex, have a Pythagoras,” said the waiter. “If you want more of a fresh, fruity taste, go for Bias.”

No, we are not at the enrollment of a course on ancient wise men or in a smoky philosophy café... Rather, we are surrounded by lavender pots, olive trees and acres of vineyards in Selçuk, an hour’s drive from Izmir, in a place aptly called “Seven Sages /Yedi Bilgeler,” which names its wines after the seven sages of Greece.  Stupefied by the view, tickled by the smell of “canard confit” and tempted by the promise of a nap in the pool area under the olive trees, we go the full range:  Lassos, a delicate rose with flowery and fruity undertones; then Anaxogoras, a fruity Chardonnay, and finish with Bias, a mix of Cabernet Sauvignon Shiraz and Merlot grapes that has won the French Vinalies Internationales 2014 award.

The owner of the vineyard, Bilge Yamen, whose name means “Sage” in Turkey, may well be termed the Eighth Sage in the equation: it is his curiosity toward history and philosophy, combined with his love of food and wine that created the vineyard. While establishing the vineyard, he wanted to make a tribute to the great men who laid the foundations of rational thinking 2500 years ago. So all the wines we have produced so far were named after one of these philosophers. Anaxagoras, Lassos, Thales, Solon and Bias.  We still have to taste the remaining two,

It is his sense of humor that got him to name his wines after the philosophers. “I thought the complexity of Pythagoras merited a wine with complex tastes,” he said. “Anaxogoras, a poet from nearby Urla, claimed the name of our Chardonnay, a full bodied white.”

Avid readers, Bilge Yamen and his wife/business partner/medical colleague Gülgün have a vast library, not only on wines and culinary arts, but history, geography, philosophy and art. “My dream is to have a Seven Sages Publishing branch,” said Yamen.

Gülgün and Bilge Yamen are not the only doctors around Izmir who have decided to undertake the hard job of winemaking. What makes doctors turn from the operating table to wine barrels?

“I think doctors, in the course of their long and laborious education, get hooked on learning,” said Yamen. “So we start learning about history, philosophy and, of course, the culture around the whole art of living. Our study tours abroad enable us to acquire a large perspective, compare and design what we can do at home. Add to this our knowledge of biochemistry and microbiology, then some of us find ourselves among vines in our middle age.”

Bilge Yamen admits that he has been dreaming of a vineyard since his days as a student at Ankara’s Hacettepe University. “I had already set my eyes on a place in Burdur,” he said. But he found himself in this part of the world where he started Adagöz, an ophthalmology hospital in Kuşadası. He focused on the history, geography and the terroir of the region with passion. It was in 2006 he realized his dream of a vineyard. In 2011, they have started production.

Then came the hotel and the excellent restaurant, whose carefully chosen menu forms interesting marriages: The quintessentially French “canard” (duck) is combined with Turkish iç pilav . The very Turkish lamb “tandir” is served with a plum sauce. Another Frenchie, the combination of cheese and pears cooked together, is wrapped up in baklava pastry to make a delicious entrée. Crème Brûlé with lavender is worth trying if you have a sweet tooth. The cheeses, brought from Kars, the homeland of Bilge Yamen, make perfect accompaniment to the wine if you just want a wine and cheese table. The menu is designed by Chef Damla Özay, but she was on maternity leave and couLd not be interviewed – a reason to go back…

The rooms, spacious, simply furnished, with a view of the vineyards and the pool, are ideal for those, like us, who felt the impossibility of heading home after a hefty meal and plenty of wine. They are often used by those who come for the workshops of culinary history and the great concerts.

“We want to have a place that caters to all the aspects of a good life,” said Yamen. “That includes aesthetics, good food, good wine, good music and good conversation – anything that would contribute to an enriched mind, with pleasure and knowledge shared.” Big names of jazz, such as Nükhet Ruacan and Sibel Köse come to Yedi Bilgeler for concerts; workshops on wine and special themes such as “Byzantine food” draw Turkish and international gourmets.

Behind the smoothly running machine, there is a hard work and curiosity. Bilge Yamen takes us to the very sophisticated winery and shows us his last production waiting in the tank– a Merlot which he thinks will be another international winner. “When it is done, I think we will be able to say that this is a very special Merlot – one that is particular to this region, this vineyard and to us,” he said. The gleam in his eyes and the awards he has picked up indicated that he will not rest until that is the case.

A shorter version of this article has been published in the HDN in July 14, 2016: