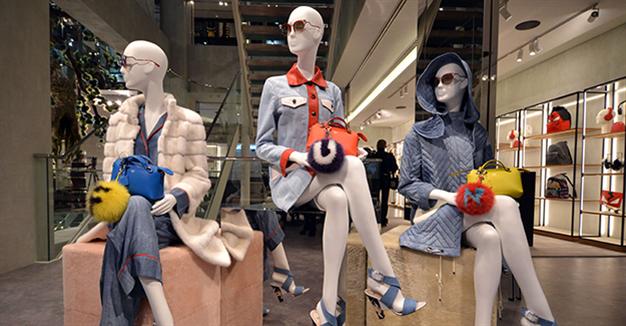 “Why even bother to buy a luxury brand if it is not instantly recognized as one?” asks my friend as she fiddles with her multicolor Celine handbag.  We have gone out together for a New Year shopping spree and I am already beginning to regret the decision.

My friend, a 40-something “corporate Barbie” who works on her professional and on private life with equal determination, is the poster-girl for Turkey’s luxury consumer, according to a survey titled “The Rise of Luxury in Turkey” by Deloitte. She has the right income and the right attitude: She is a “powerful woman” who reflects her hard-earned status in “status objects” such as handbags and shoes; nourishes that skin with state-of-art cosmetics, buys her own jewelry and invests in the last technology for herself, her husband, her two kids (fans of wearable technology) and for their showcase home.

The question is whether there is enough of her kind to keep the luxury sector going in Turkey, now that the Russians are no longer coming.

As the New Year approaches, Nişantaşı’s Abdi İpekçi, and its provincial cousin in Izmir, Mustafa Bey Street, goes through a facelift. Decorations and billboards mercilessly remind you that it is the time to give and the gift better be generous. Oh yes, we have all made our token tour of the Xmas Bazaar at the French Cultural Center in the heart of “infidel Izmir” but that was for the macaroons and the vin chaud, the somewhat syrupy hot wine, rather than for the pin cushions and place-mats.

Turkey’s luxury market accounts for 1 percent of the global sales annually, which Deloitte calculates as 5.3 billion TL in 2014. It is expected to hit 7 billion TL by 2018, driven watches, accessories and jewelry, already leading sectors. Turks are, according to the report, a society that is largely at the “urge-to-splurge” stage, with a handful of consumer types which all of us could easily recognize. The  typology of the splashers below belong to me, not to the report which is more on statistics and less on satire:

1.The Boardroom Goddess aims to put the right Monolos on those toned-legs as she strides to the Board.

Not-so-secret aim: become the first female CEO of the company. Secret fear: lose her job and her spouse to a millennial who is “trendier.”

2.The Metropolitan Male tries to project power and wealth through the thinnest phone and fattest cigar.

Not-so-secret aim:  Get the right image, right job and the right millennial girl by getting the right tools. Secret Fear: Living in a small town

3.Millennials regard smart phones with the same sense of urgency that the Neanderthals must have regarded their weapons.

5.Old Money’s third generation aims not only to use brands but design them.

Aim: Be part of the international bobos. Fear: New Money

6.Tourists, such as Russians, Central Asians, Middle Easters stomp at Istanbul and the coast, alternating between luxury hotels and shops.

Aim: “I bought them at Istanbul.” Fear: Instability

The great international marks that have comfortably settled on either side of the Bosporus, not to mention the south coast, however, may now be at a “wait-and-see” period.  The Russiantourists are gone; the dollar is on the rise and Prime Minister Ahmet Davutoğlu’s promise of “new tax on luxury import goods” sent some alarm signals.

The winners of the economic incertitude may be the second-hand stores, both for luxury clothes, accessories and watches. “The Turkish people’s love of luxury is stronger than the economics,” says Ceren Sür, who runs a second-hand brands store, “Happily Second Boutique” in Ankara. “That is why the second-hand Louis Vuittons, Chanels and Burberry’s are very much in demand. A second-hand Chanel in good condition can be one fourth the price of a new one.”

And who is buying? “Professionals, millennial, but not the so-called high society,” says Sür. “They are willing to sell, but not buy second-hand. But the mind-set has changed: it is no longer a shame to sell your old brands.”

Another alternative to the second-hand is, of course, a fake: In Istanbul’s Covered Bazaar, Izmir’s Alsancak and Ankara’s Karum, perfect fakes are sold at the backrooms of boutiques, despite heavy controls. A far cry from the “real fakes” sold at the bazaars, these are made to fool Bulgari jewelers and Hermes connoisseurs themselves.

“It is a fake that costs more than a base salary,” says the owner of one such shop, who, not surprisingly, requested anonymity. “It may be fake but it is certainly luxurious. It is often bought by women who have the real thing as well, but who like to mix and match.”

“Real ladies do not wear fake,” read a sign at the visa section of the French Consulate in Istanbul.  As I carefully tucked my “Hermes-inspired” scarf in my bag, I thought with amusement of just how many women carried fake Cartier, Hermes, Celine and Louis Vuitton at Bastille Day and got congratulated on their taste.