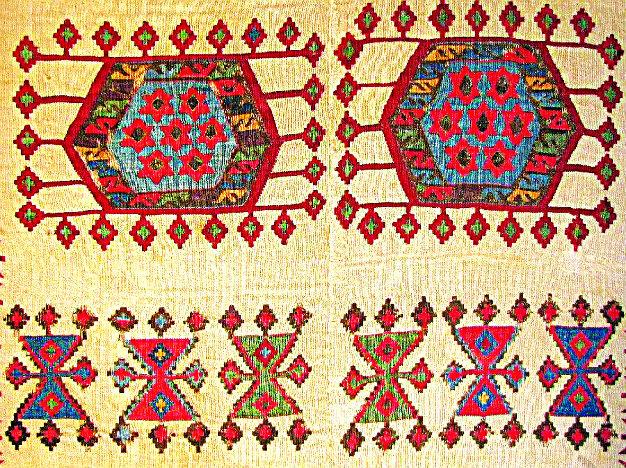 As you enter the “Josephine’s Fragments” exhibition at the Erimtan Museum near Ankara’s citadel, your eyes are immediately drawn to the picture of Josephine Powell on the far wall. A wrinkled face with magnetic blue eyes, the American photographer who travelled across Anatolia makes you think of an aged Gertrude Bell, as played by Nicole Kidman in the new movie “Queen of the Desert.”

As you enter the “Josephine’s Fragments” exhibition at the Erimtan Museum near Ankara’s citadel, your eyes are immediately drawn to the picture of Josephine Powell on the far wall. A wrinkled face with magnetic blue eyes, the American photographer who travelled across Anatolia makes you think of an aged Gertrude Bell, as played by Nicole Kidman in the new movie “Queen of the Desert.” Both women, intellectual nomads who went in search of unknown civilizations, seem to have the same curious but respectful regard that encourage total strangers to welcome them and pour out their stories.

The exhibition, “Josephine’s Fragments,” is a short trip into the rich geometric details in Anatolian kilims, which Josephine Powell recorded over her three decades of travelling in Anatolia. The exhibition, which can be seen until June 10, is prepared by Koç University’s Vehbi Koç Ankara Research Center (VEKAM) and curated by Kimberly Hart. It is a small selection from Powell’s vast collection of color slides of Anatolia, Anatolian flatweaves and everyday tools of rural and nomadic life, donated to the Koç Foundation in 2006.

Born in 1919, Josephine Powell was invited to Istanbul in 1955 by art historian David Talbot Rice to photograph the ancient Byzantine mosaics of the Grand Palace. Having finished her work in Istanbul, she travelled east – the first foreigner to be given permission to drive across the country after the foundation of the republic.

Friends warned her of the perils of travelling on her own, but she found only courtesy: “People treated me better than I had ever been treated,” she told Andrew Finkel in an article in Cornucopia magazine, three years before her death. “They invited me into their houses, fed me, found me somewhere to sleep … It was never dangerous to me.”

She became interested in Turkish flat-woven textiles. She set out to work with the Turkish nomads themselves, gathering information about their handicraft and become a collector, not only of the patterns in the kilims but kilims themselves.

She did not consider herself a feminist, but women remained at the center of her work in Anatolia - from the photos and their role in weaving kilims. Along with the chemist Harald Böhmer, she helped establish the Dobag Project – the first Turkish women’s co-operative – which makes carpets using authentic designs and natural dyes.

“Josephine’s Fragments” lets us observe the transfer of identity and memory, contact with one’s roots, as well as transmission to future generations. The brochure of the exhibition says Powell, in her talks and published works on nomadic women weavers and their textiles, considered kilim patterns as a form of tribal identity that would vanish as rural life changed rapidly in Anatolia.

As I write the article on Powell, why do I keep thinking of Gertrude Bell, the English writer, traveler, political officer and archaeologist who explored, mapped, and became highly influential in Middle East politics at the end of World War I? I think it is because both women dealt with vanishing fragments: Bell, with fragmented peoples of the Near East, whose lives were about to change as the Ottoman Empire collapsed and as “lines in the sand” were drawn; Powell with the fragments of rural life fast disappearing, just like the patterns on the kilims. Capturing those fragments in word and image were not only acts of intelligence, but also of courage and empathy.
Published in Hürriyet Daily News on May/20/2016