BETWEEN THE SEA AND THE WIND: SAILING WEIGHS ANCHOR IN İZMIR 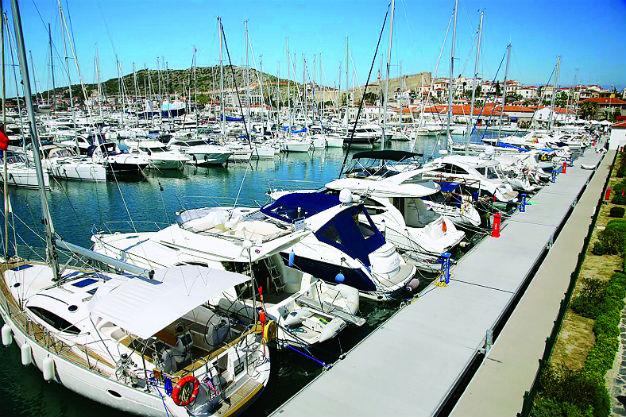 Between the sea and the wind: Sailing weighs anchor in İzmir

Right before the Izmir's main square stands a modern, linear statue that symbolizes a sailboat. As you pass through the road between Konak Pier, which was designed by Gustave Eiffel in 1890s, and the famous clock tower, you come across a group of white-colored sails that impress upon you once more that sails are the symbol of the city.

Even a total newcomer driving through the coastal road that runs through the heart of the İzmir to the resort town of Çeşme would be able to guess that sails were one of the symbols of the city. Right before the city’s main square stands a modern, linear statue that symbolizes a sailboat. As you pass through the road between Konak Pier, which was designed by Gustave Eiffel in 1890s, and the famous clock tower, you come across a group of white-colored sails that impress upon you once more that sails are the symbol of the city.

Surrounded by the hard winds of Alaçatı, Çeşme, Urla and Foça, it hardly seems surprising that sailing is to İzmir what golf is to Kemer. The city, which has five marinas, is host to the Ege Open Sea Yacht Club (EAYK), International Çeşme Yacht Club (ICYC), Urla Yacht Club (URİYAT) and countless other yacht or sailing clubs from rotaries to municipalities – all of which organize joint or separate races. Middle-class kids enroll in a sailing club in their teens and businesspeople rub elbows not only at yacht fairs but at competitive races.

Arkas, one of the largest İzmir-based companies, has its own sailing team which sweeps regional championships and has taken the Winter Trophy, the longest sailing race in Turkey, for three consecutive years.

“Çeşme and İzmir has an important potential for us,” said İskender Akbaş, the Turkey director of Jeannau, one of the main sail-boat producers in the world. Jeanneau has picked İzmir for a three-day yachting festival between June 3 and 5 that will introduce half a dozen types of sail boats which he describes as “all strong and popular boats that are of different sizes and qualities.”

“We are very much aware of the passion of İzmirians toward the sea and want to ensure the full exposure of our boats to them,” he added. The three-day event will also include the participation of Hasan Denizkurdu, a former minister of justice who is a determined sailor.

“The Jeanneau Boat Days is a large-scale event that is open to all,” said Akbaş. “We are aware of the fact that İzmirians take sailing seriously and competitively. It is a hobby and a way of life for them. On the other hand, half of the Turkish sailing team which will participate in the 2016 Rio Olympics are from Aegean clubs, which is no small thing. There are five marinas in greater İzmir and plans to build more.

But Özlem Akdurak, who has long been in the Aegean sailing market as the Turkey chair of Elan sailboats and the president of the Çeşme Sailing School, cautioned that the existing capacity of the marinas on the İzmir peninsula fell painfully short of meeting the present demand, let alone the potential.

“There are no marinas in the city. Levent Marina is practically non-existent. Plans to build a marina in Bayraklı, near Karşıyaka, are progressing very slowly,” she told the Hürriyet Daily News. “This is Turkey’s third largest city, with a population of 4 million. Yet, when you compare it to port cities in nearby Greece, the marinas are very inadequate.”

Akdurak believes that this discourages the potential growth of sailing among İzmir locals, as well as interest from foreign sailors.

“İzmir, with its great capacity for training competitive sailors, can develop so much more in sailing and increase its place on the global map,” she added. “Right now, the potential is underexplored. In Europe, you’d find a marina every 30 miles in a city like İzmir. Turkey is still virgin territory.”

“İzmir and its regions is a growing market for both motorboats and sail boats,” said Ayşe Koraltan, who took up sailing as a sport in her 30s, along with a band of girlfriends who formed one of the first all-women teams in the region.

“It fits with the İzmirian way of life that is close to the sea. There are major marinas in the peninsula, including TEOS, which opened in Sığacık, near Urla, recently. The proximity to the Greek islands, and the fact that there are races make the whole adventure very pleasant.”

The team’s sailboat, called “Safinaz” after the Turkish name for Popeye’s energetic girlfriend, has competed in more than 300 races. Koraltan herself has joined in the sector professionally and founded GCG marine, which constructs Rockharbour boats in Turkey.