WITH SECTOR IN RUINS, A TOURIST-FREE SUMMER FOR TURKEY? 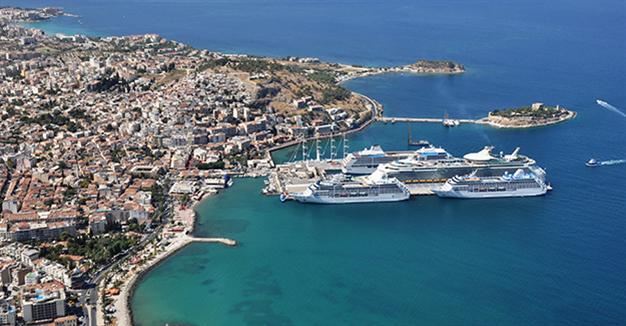 With sector in ruins, a tourist-free summer for Turkey?

The speed at which Ataturk Airport returned to “normal” was symbolic: Turkey wanted to show to the world that it was safe for tourists and security is as strong as anywhere in the world. Large-scale security operations were also launched in many areas the next day, including İzmir and other touristic areas.

Something is missing as we enter our favorite boutique hotel that overlooks a village (in)famous for its fruit wines.  The offer of the welcome drink (elderberry syrup, whose recipe is a secret) is not there and neither are the fresh flowers in the pool. The place has lost its “carefully polished” quality and its indefinable sense of peace and quiet.  Several teenagers are complaining that they cannot get drinks by the pool and a huge group is loudly arranging a group selfie in front of a perfect sunset. Our favorite place - a far-away breakfast verandah, where we spent many mornings talking to well-informed strangers who have just been on a historic tour of Turkey - is closed. Worst of all, the clientele – international, eloquent, well-read and discreet – has been replaced by another group: Large families with bleach-blonde women shouting shrilly at their children and men shouting into their iPhones.

“We have had practically no international bookings this year,” says the youthful manager of the hotel, which has become internationally known. “Our clientele was special. They were middle-aged amateurs of art and history, who would come to Turkey to see Istanbul, Cappadocia and spend several days here on the last leg of their trip before departing. Mostly Anglo-Saxons, with some Dutch, Nordic and French. They would take in Ephesus and visit as many of the Seven Churches of Faith as they could, then leave. Alas, they are not coming his year.”

“We had to adapt,” she sighs, looking at the breakfast room with shouting kids. “This means attracting local tourists and cutting costs. “I cannot open the far-off terrace with a reduced staff.  The worst part is that I do not see much of a prospect for improvement next year either.”

The hotel manager is not alone in her woes. The mighty Ephesus, which receives about two million visitors every year, has become a symbol of the decline. A tourist guide has posted a picture on social media of the empty ruins, with just a few lonely tourists.

2016 is the “Black Year” of tourism, the worst in the last 30 years, since the years of terror in the streets that led to the military coup of 1980.

Turkish tourism players, who boasted at the beginning of the 2010s that Turkey was a tourists’ paradise, had a lot to be hopeful for: Mushrooming hotels from the high end to the family-run “pensions,” a varied geography that was becoming more and more accessible as more roads were built, a growing global awareness of Turkish cuisine and “new wines of the ancient world,” and a national flag carrier, Turkish Airlines, that flew to and from many destinations. Add to this the cheaper chartered planes, the great many package tours, and a hefty budget earmarked for the promotion of Turkish tourism on all international platforms. It was no wonder that the country was claiming that it could lure the luxury traveler, the intellectual traveler and the sun-sea-sand seekers who wanted an affordable chaise-longue on the beach – all included.

In Istanbul old parts of the city revived and Istanbul became the sixth most visited city in the world. The southern city of Antalya attracted Russians, Germans and other nationalities, Brits spread around Bodrum, and tourism kept growing, accounting for five percent of GDP.

Then the bubble burst – or, rather, it was shot down.

The Syrian civil war, followed by attacks in various parts of Turkey including the historical peninsula and the commercial İstiklal Avenue, followed by the downing of theRussian jet, followed by the refugees, followed by the stand-off with Germany over the “Armenian genocide dispute,” led to the despair of the sector. The struggling tourism of 2015 turned into paralysis. The government announced a first-aid package to the tourism sector, the president called on Turks abroad to vacation in Turkey, and called on local Turks to “holiday in Turkey rather than abroad.” None of this particularly satisfied desperate tourism managers.
So Turks have done what they always do when they are gripped by despair: Blame each other, pray for improvement, and turn to jokes.

Alanya shopkeepers made headlines by holding a collective prayer. Tradesmen in Fethiye and Bodrum fought over a single tourist. A joker from Antalya posted two elderly, fat (allegedly) Russian women on the beach, saying it was “Revenge of the Russians – apologize quickly!”

But just when the apology to Russia came and the tourism owners started expressing hope for the 2017 season, the suicide attack hit the Istanbul Atatürk Airport – the third busiest in Europe. The speed at which the destroyed area was rebuilt and things returned to normal was symbolic: Turkey wanted to show to the world that it was safe for tourists and security is as strong as anywhere in the world. Large-scale security operations were also launched in many areas the next day, including İzmir and other touristic areas.

But will tourism recover? Certainly not this year, and not likely next year either. The question is not one of security, but of the perception of Turkey as a brand in tourism. Even if the security issue is solved, rebranding will take time.

A version of this article was published in July/02/2016