‘OTHER’ VICTIMS OF TURKEY: HANDE, ASLI AND R.D. 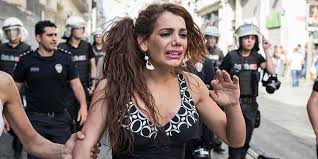 ‘Other’ victims of Turkey: Hande, Aslı and R.D.

What twisted logic enforces a hierarchy among the victims and causes us to take some victims of violence to heart but push others away? Why do we have trouble standing up for Hande, the mutilated prostitute; Aslı, the uncompromising rebel who wrote for a pro-Kurdish daily that we do not read; and R.D., the Kurdish girl raped by village guards in the southeast?

The photos of Hande Kader, a 22-year-old transgender prostitute (no, I will not use sex worker, a euphemism that I find artificial) who was mutilated, burnt and murdered in the heart of Istanbul, haunt me.

She has the face of a tomboy, with protruding front teeth, a mouth ready to laugh and eyes that look straight ahead. One photo shows her crying; long hair disarrayed; long pendulum earrings, her arms held by two police officers. The videos we have of her shows her at a rally, putting on a brave, carefree face, pushing back her tears and fears. Those must belong to the 2015 Gay Pride, where people marched despite the ban.
The words of Kemal Ördek, an activist for rights of transgender prostitutes, also haunt me.  Knowledgeable, street-smart, analytical and very eloquent, Ördek has written a very strongly worded article where he exposes our pretenses of being kind, empathic and respectful of human rights. “Why can’t we show the same awareness, some hatred toward the murder of Hande Kader that we showed to Özgecan Arslan and all the young women who were raped and murdered?” he asks, not unjustly.

Hande Kader, like Özgecan, a 19-year-old student, got in a vehicle and was murdered by the person who drove it. In Özgecan’s case, her death and mutilation came from the driver (and his relatives) who drove a minibus. The brutal murder sent all women’s organizations onto the streets, demanding the laws on rape be amended. A draft known as the “Özgecan Law” came about, urging judges to give the maximum penalty to rapists. Sümeyye Erdoğan, the president’s daughter, visited the grieving family; President Recep Tayyip Erdoğan, no great advocate of women’s rights, pledged to follow the case himself until the aggressors received the heaviest punishment – which they did.

Hande Kader, for her part, simply got into a car of some men she thought were “clients.” Her body was found mutilated and burnt a week later. No minister or “First Daughter” visited her family, whose members were not even there to claim her body. There is no joint parade of women’s associations – left-wing and conservatives united – asking for better laws to protect transgender women. If it had not been through the efforts of Ördek and other Lesbian, Gay, Bisexual, Transgender and Intersex (LGBTI) activists and Hürriyet columnist Ayşe Arman, we would not have heard about it.

Ördek, who has been relentlessly fighting a legal case after he was raped and attacked by three men a year ago, said “trans-phobia” and “whore-phobia” made Turkish society insensitive to the human right violations of people like Kader. “The general belief is that Özgecan did not deserve what happened to her, but Hande did, because she is a prostitute,” he said.

I blushed, thinking of the way our elders repeated the Turkish proverb “the water pitcher always gets broken on the way to the fountain” which means roughly “live by the sword, die by the sword.”

“That is exactly how many people see it,” said Ördek. Unfortunately, the many people here included police, jurists and legislators, as well as conservative women’s groups who would not think of defending transgender rights. Those who would take up the cause would get criticized for it. “End Femicides Platform,” one of the women’s groups who expressed support for Kader, received criticism on social media: “You say you defend women. Transgender are not women,” wrote more than one person.

In his detailed research titled “Being a Trans in Turkey,” Ördek refers to many cases: transgender prostitutes attacked by a gang of men carrying iron bars in Ankara; a transwoman approached by the traffic police for a bribe, then beaten up when she refused to give them money; a Syrian transgender prostitute complains of neighbors’ harassment and says she tells clients that she is Lebanese, as “people here do not like Syrians.”
The shock, sadness and shame I have felt toward Kader somehow took me back to the 1990s – when, as a journalist based in Brussels, I had covered a press conference of girls who were raped by village guards in the southeast of Turkey. I was aware of the war, the feudal culture and honor killings. What I did not know was that the village guards, Kurds armed by the government to protect the villages against the Kurdistan Workers’ Party (PKK), used those guns to rape women… girls. One of the girls, in her teens, said she had been first raped and then forced to march on land where the aggressors knew there were mines. She lost a leg, but at least she lived.

I heard and read about the village guards’ rapes for years afterwards. One of the most touching articles was written by Aslı Erdoğan, a novelist, columnist for Özgür Gündem and human rights activist, who was detained earlier this week after a police raid on her apartment.  Most of the reaction against Erdoğan’s arrest came from international circles – the protests in Turkey paled in comparison to the earlier protests when mainstream journalists were taken into custody.

Erdoğan wrote in her book of essays, “When Would A Journey End” published in 2000: “R.D., in a village near the southeastern town of Batman, was 17 when she was raped by three village guards that were allegedly “protecting” the vacated village. Scared by the Kalashnikov at her throat, she kept silent as they raped her over and over. Then she got pregnant and the rape case went to the court. Only one of them, the father of the child, was sentenced… to 18 months.”

Erdoğan’s essay on the raped child-women, which I re-read yesterday, was called “De Te Fabula Narratur,” or “the story applies to you.” Indeed, it does apply to me, to us – to our ignorance, to our ability to ignore what is far away and “not quite ours,” to our hypocrisy, to our ability to regard the victim as “the other” and to our inaction.