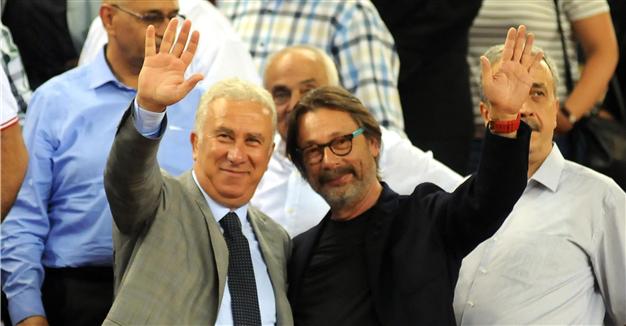 My relationship to football is limited to asking my husband to turn down the sound if I have failed to escape to the movies with a girlfriend during a match. Nonetheless, as any red-blooded İzmirian whose ego needed repair after the Nov. 1 election results, I eagerly waited to see whether two of İzmir’s most storied football clubs would manage a violence-free game on Nov. 8 despite putting its supporters in the same stadium.

The fierce rivalry between the two, both of whom play in the second-division PTT 1st League, is caused by geography, history and identity, while also feeding on modern clichés.

Göztepe, known as Göz-Göz, calls itself “the true 35” after İzmir’s car number plates, while Karşıyaka, or Kaf-Kaf, considers itself “35.5.” The supporters of the two, Göztepe’s Yalı and Karşıyaka’s Çarşı, have a record of violent clashes, including three years ago when it took 2,500 security guards to calm them down. This is no small thing for a self-declared progressive city that boasts of solving its problems with rakı and ice rather than clubs and stones.

On Nov. 8, armored water cannon designed for dousing riots (TOMA) used gas and water against two group of supporters throwing bottles at each other on Karşıyaka’s main avenue. Police took some of the supporters into custody and several wounded fans were taken away in an ambulance.

Once the game started, calm remained in the stadium, mostly because the number of fans were a mere 15,500 – one-sixth of the stand’s capacity. The presidents of the two teams, sitting together with İzmir Metropolitan Mayor Aziz Kocaoğlu, İzmir Gov. Mustafa Toprak and Turkish national team coach Fatih Terim, were shown smiling warmly to each other despite the usual shouts of obscenities by the fans.

The events would, nevertheless, be considered minor on the Turkish scale. Despite a “zero tolerance for hooliganism” legislation in 2011 that introduced up to six years in prison for fans who dismantle seats and two years in prison who chant racial slurs and obscenities, violence in football matches is often seen. This reached a new height when a bus carrying Fenerbahçe players was attacked in Trabzon earlier this year, with 42 people, including former Spor Toto Super League players such as Dirk Kuyt and Emre Belözoğlu, barely escaping death.

As we watched the game in one of the cafes in Izmir’s Kordon, the water-front, a 20-year-old fan told me: “I don’t think you can be a true Göztepe supporter without being involved in a fight with a Karşıyaka fan.” This can be fairly easy – walking around the Karşıyaka bazaar with a Göztepe scarf may ensure a fight.

When Karşıyaka’s Engin Baytar scored the only goal in the game, he started shouting obscenities about what he would do with the Karşıyaka player’s “mother wife, daughter and horse.” I asked him whether he swore so much usually, which led the son of a Yalı to blush and say: “Only when I need to express my feelings in a football game.”

My husband, whose family supported Göz-Göz for three generations, eyed me up suspiciously as I wrote the article. “You won’t forget to add that the thaw started with the Göztepe club’s owner visiting a Karşıyaka basketball match in the Euroleague, will you?” he asked. Early in our courtship, I asked him whether he would prefer me to take on his last name or support his football team; he didn’t answer, but his brother handed me a Göztepe T-shirt to wear.

Despite the hard positions of the fans, earlier this year, Göztepe’s new owner, Mehmet Sepil, the city’s native son who became a global oil tycoon, announced that he would work with Karşıyaka counterpart Ali Erten to create an atmosphere of solidarity, unity and sportsmanship between the two teams. In a highly publicized ceremony, the two teams said that they would have joint sponsorship from the Folkart Construction company.

“Given the competition between the two teams, it is an important signal that the two teams will have the name of the same sponsor on their uniforms,” said Sepil at the press ceremony in September. “This is a signal of unity and harmony – a move against the violence and enmity in Turkey at a critical time.”

After a series of mutual visits between Sepil and Erten, the two men agreed to play the İzmir derby on Nov. 8 with fans from both teams attending the game at Karşıyaka stadium – a brave initiative as fans of away teams have not been permitted to attend derbies since a Turkish Football Federation (TFF) decision in 2010-11 due to violence in the stadiums.

Their joint request was accepted by the local authorities, but not without some concern. “Let’s bring together manager, footballer and fan into this historic rivalry and paint a picture of fair play,” Toprak said. “We trust our fans,” he added, but nevertheless deployed a major police force and several TOMAs on the streets.

The past records of the two teams were far from assuring. In 2012, some 2,200 police officers and 275 private security guards were at the stadium to maintain order, but 70 more fans were detained in various incidents. The spectators in the stands reserved for Göztepe fans forcefully removed their seats and threw them at officers.

But both Sepil and Erten remember an earlier time when the derby set a world record for the highest attendance for a second-division match, with more than 80,000 fans from both teams attending the fixture in 1981.

A tale of two clubs

Of the two teams, Karşıyaka can boast a longer history. Established on Nov. 1, 1912, the club was established by several Turkish sportsmen, in sharp contrast to non-Muslims who dominated the football scene in the Ottoman Empire. The club chose its colors as red and green – for Turkey and for Islam, respectively. It boasts that former Prime Minister Adnan Menderes played in the team and that the star-and-crescent symbol was given to it by Atatürk.

Putting glorious history aside, the sports club has soared in the recent years – particularly in basketball. The football club, now run by Erten, has also made good transfers in recent years and was tipped as the winner of the derby.

Founded more than a decade later than Karşıyaka, Göztepe has been considered an investment of prestige for many upcoming businessmen, particularly after it started competing in European competition. Dinç Bilgin, the once-legendary media lord, added the soccer club to his prize possessions in 1997. But, as his banking and media empire collapsed, the Saving Deposit Insurance Fund (TMSF) took control of the team, which then went into a sharp decline, falling as low as the amateur leagues. Nevertheless, İmam Altınbaş, owner of Altınbaş Jewelry, bought the football team at a price 12 times its estimated value, at 1.305 million Turkish Liras. After a few years, Altınbaş sold the club to Sepil, the co-owner of Genel Enerji, for 7.5 million liras. The team, which began to show signs of recovery in 2010-11, literally soared with Sepil, particularly when he brought in Metin Diyadin as technical director.

Both Sepil and Erten are candidates for Turkish National Olympics Committee’s Fair Play award. Their fans, however, may need more time to shed past bad habits.

Published in the Hürriyet Daily News on November 10, 2015