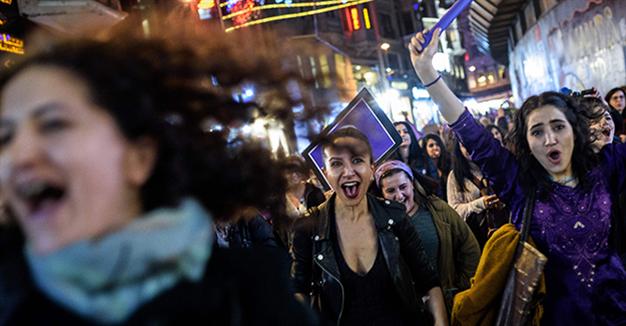 What fools we were as we struggled for equal rights at home and work, in word and deed!

What fools we were as we struggled for equal rights at home and work, in word and deed! Little did we know that we were misguidedly depriving ourselves of all the qualities that made us beautiful, respectable and valuable, that we worked too hard and too long, talked too much, pushed too hard, acted too foolish/too independent/too assertive, kissed/contradicted/mocked too many men and, horror of horrors, became friends and colleagues rather than wives and mothers!

It took a superhero president and a prime minister who wanted to be a father and a brother to us all to understand that we were struggling in vain. A path, feminism alla Turca, is open, nay, encouraged. After all, what did President Recep Tayyip Erdoğan say on Women’s Day? “The women’s issue is an issue for our country’s and our nation’s future. We talk about a Turkish-style presidential system and a Turkish-style constitution. On this issue [women’s rights] too, we are obliged to develop a Turkish-style model and implement it. We don’t necessarily have to express, defend and implement women’s rights in the format and style that exists in the West…”

Ah, all those years we studied/assessed/strived for international standards of human rights, democracy, institutions and such. Why bother with Copenhagen criteria whenAnkara criteria will do just as well? Everyone, from top-selling jewelry designers to gourmet writers, understands that “local” is a buzzword that pays off in sales, or votes. You/your palate/your home/your country have their special conditions that defy universal standards.

The word “local” gives you license to be creative. Given the “local context,” you can have a certain style of freedom of expression that entails hostile journalists and newspapers to be controlled, harassed and closed down, you can have a local-style presidency which in fact refers not to a president but a sultan, you can have a local-style of freedom of assembly where demonstrations are suppressed brutally. It is all in the style, my dear… after all, don’t some local styles force you to wear swimsuits that make it impossible for you to feel the water, let alone swim?

So encouraged by Erdoğan, I took the liberty of drafting the principles on Turkish-style feminism, based on the past remarks of the Justice and Development Party (AKP) folks:

1.Men and women are not equal. Men are men; women are flowers, God’s gift to us for us to look after; mothers, wives, decent and delicate ladies whose honor should be protected.  In fact, they are anything but women – an unkind term. The Turkish-style feminism will refer to ladies’ rights.

2.All women are equal… but mothers are more equal because motherhood is the highest rank that a woman can hope to achieve. If you can have more than three kids, you become even more equal.

3.All women and girls have a right to education. For young women, that education should ideally take place in schools close to their homes, where they would not have to take public transport or live in a foreign town in dormitories where local boys bother them. The state, unfortunately, cannot guarantee all girls’ safety in the above cases, but, on your behalf, encourages good-willed neighbors to report to the police if your honor is compromised.

Adult women are also entitled to lifelong learning. Various knitting and childcare courses, as well as sports, are available for them on a “ladies only” basis at municipalities.

The state has the duty that gender education be integrated into schools early on. In elementary school reading books, women are portrayed as carrying the main responsibility in the house. We also glorify the role education played in women’s life in the Ottoman Empire, in the harem, where women received good training in pleasing the sultan. You are to kindly take the First Lady’s word over that of academics.

4.All women are free to wear what they want… provided it is in line with the local custom and the president’s and the Directorate of Religious Affairs’ (Diyanet) idea of decency. As the Turkish movie “Mustang” points out, “clothes that are shapeless and caca-colored” are preferable. Turkish-style feminism embraces headscarves and body skimming clothes and/or both. You wear tights, miniskirts and other provocative clothes deemed as inspiring desire by Diyanet (them again) at your own risk.

5.All women are free to work… and the state has the duty to ensure that the work does not distract them from getting home early to cook dinner and take care of their children. Flexible working hours and other perks are available for mothers, but not for the unmarried, childless, selfish workaholic b/witches.

6.All women are free to get married… from the age 12 on. It is the state’s duty to encourage family, which is the foundation for creating “a generation of believers.” Religious marriage, with or without an accompanying civil ceremony, is encouraged. As it gives no legal rights to women in case of a divorce, it is a great way to build trust and interdependence among couples. T

7.All women are free to continue a marriage and work out the challenges, such as beatings, emotional and physical harassment or rape. A new parliamentary commission is indeed working on how to lower the rate of divorce in Turkey. Of course, if marriage puts their lives at risk, the state will provide protection but the means are scarce.

8.All women are free to avoid rape and harassment. They can avoid going out at night, laughing too loud, keep away from boys and sex before marriage and resist provoking the desire of family members. If, regrettably, she is raped, she is free to marry her rapist, provided it is not a close family member. In order to minimize the contact women have with the opposite sex, a wide spectrum of measures, from pink buses to presidential snubs to avoid kissing in parks, are launched.

9.All women are free to have an abortion… for the time being.

10.All women are free to participate in politics. In fact, as we never get tired of saying, they got this political right far before other nations. So, just like their male counterparts, they are free to express their opinions. They can do so without shouting too much, criticizing the president, the prime minister and the party leader, with a respectable voice. The government will ensure that a woman will head the Family and Social Affairs Ministry and we will never hear her speak disrespectfully, if she speaks at all.

Ah, the easy life of a Turkish-style feminist!