WHY AEGEANS GIVE THE COLD SHOULDER TO REFUGEE RETURN 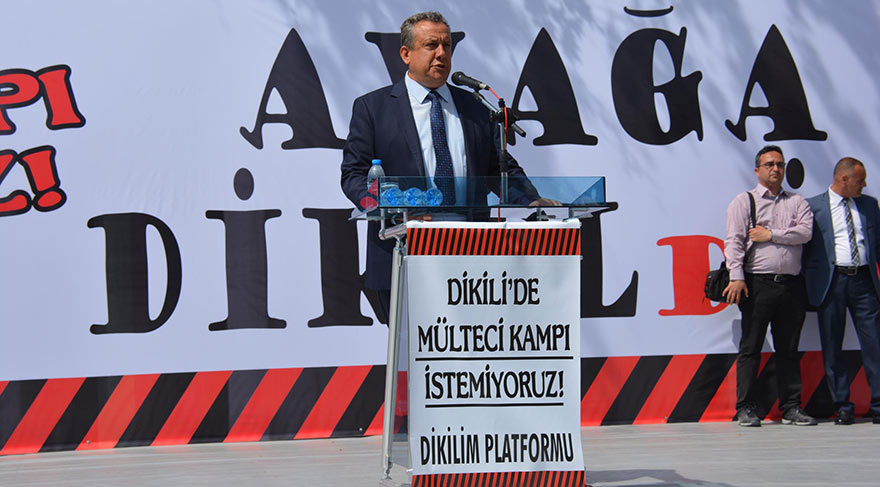 Why Aegeans give the cold shoulder to refugee return

A small, single poster saying “Refugees Welcome” greeted the first batch of refugees who arrived in the Aegean port of Dikili on April 4. The first group of refugees, Afghans, Pakistanis and some Syrians in three separate boats from the Greek island of Lesbos, displayed grim faces, with no trace of joy or relief, as they were escorted to the makeshift registration center.

A small, single poster saying “Refugees Welcome” greeted the first batch of refugees who arrived in the Aegean port of Dikili on April 4. The first group of refugees, Afghans, Pakistanis and some Syrians in three separate boats from the Greek island of Lesbos, displayed grim faces, with no trace of joy or relief, as they were escorted to the makeshift registration center.
Two days earlier, just a stone’s throw away from the tent, hundreds of people had held a demonstration protesting the arrival of the refugees. “No refugees in Dikili,” said the banners, as some of the demonstrators accused the government of having a direct hand in “the dirty war that caused the Syrian tragedy in the first place.”

“We do not want the refugees here,” shouted the demonstrators, protesting any attempt to have a permanent refugee camp in Dikili. The town’s mayor, Mustafa Tosun, spent the last two weeks trying to omit such a development and finally satisfied that this would not be the case, assured the public that all the arrivals were transported to a refugee center in Kırklareli, near the northwestern city of Edirne along the Turkish-Bulgarian border.

But the public remained unconvinced the remaining transfers would be as quick or as smooth, with more than 200,000 refugees coming in. For the people on the street, it is likely that some of the refugees will try to remain in the city and become part of the “black market.”

“There are already some Syrians here who are working for 20 TL [Turkish Liras] as fishers in boats or in the fields. This is less than half of what Turks get as a wage,” Nebi Özcan, a fisher, told daily Milliyet. “The city cannot have more refugees.”

The same mix of controversy, anxiety and anger is also seen further down the Aegean in Çeşme, one of Turkey’s swankiest resorts on the coast. An 1800-square-meter detention area has already drawn the anger of the tourism sector, which maintains they have already received a severe blow from the war in Syria, the downing of the Russianplane last year and a number of recent suicide attacks in Turkey.

“The Greeks are very wisely vacating the islands of refugees as the tourism season starts,” said Mehmet Işler, the chairman of the Aegean Tourism Managers Union (ETIK). “We are not only taking refugees back but placing them right at the port, the touristic heart of the city. Tourists do not want to see misery. They simply take their business elsewhere. We have already had cancelations from tourists. I cannot imagine what the remaining tourists will do when they see a refugee camp right on their holiday. I cannot understand why we could not find another solution, such as bringing refugees to another bay in the Aegean and establishing the center there.”

On social media, a fierce war of words has taken place between those who “do not want refugee camps to spoil the view of Çeşme” and the others who accuse them of ignorance and a lack of empathy. “These are people who are miserable and need help. They are worried about their life and you are worried about the view from your million-dollar villa,” said a tweet at the height of the debate.

In Çeşme, as in Dikili, the public is unconvinced about government assurances that these centers will be temporary and the refugees, once they are registered, will be transported to permanent camps elsewhere. The same sentiment of mistrust has also been echoed by local authorities, which are mostly from the opposition Republican People’s Party (CHP).

“The public thinks that part of the reason İzmir is selected for refugee centers and refugee settlement is an attempt to change the demographics of the region,” said Nazik Işık, a chairperson on the town council in Karabağlar, a working class district in the Aegean province of İzmir where many refugees have settled. Işık, a soft-spoken academic and activist who has worked on gender, migration and employment issues with international organizations, said the city was worried more refugees would cause problems, from health to education.

But she refused to write off İzmir as a city hostile to refugees and newcomers in general. “When we look at İzmir’s past, it is a city that welcomes migratory movements,” she said. “Most of city’s top brass was born elsewhere. So it would be unfair to refer to İzmir as a xenophobic city. Also, the people of İzmir have done their best to help the refugees when they arrived here. However, a refugee wave of this scale, in a city struggling with youth unemployment and the pains of urbanization, is difficult, particularly when the whole process is carried out in such a closed manner.”

Işık would not go as far as some CHP people, who refer to the camps as the ruling Justice and Development Party’s (AKP) revenge against İzmir, a city which considers itself Turkey’s fortress against the AKP. However, she is also worried the refugees, if given political status, can change the voting patterns in the region. “There are 125,000 Syrian refugees in the city,” she said. “25,000 of them are settled in Karabağlar. The difference between the AKP and CHP votes in Karabağlar was 20,000 [in the CHP’s favor].”

Other remarks by CHP circles are harsher. CHP İzmir deputy Tacettin Bakır, speaking in parliament, accused the government of “putting the whole Aegean under the risk of terrorism” so that AKP could give the right to vote to Syrians in the 2019 elections.

In the heart of İzmir, EU experts have also expressed their woes over the Turkey-EU deal and its impact on fragile ties. “The Turkey-EU refugee deal is a tough one. It is legally dubious and hard to execute. It is seen as a cooperation tool that may breathe life into the stagnant ties between Turkey and the European Union, but if it goes the wrong way, it may create further disenchantment and distrust on both sides,” said Can Baydarol, a European Union expert and academic, at a conference organized by the EU Information Centre in İzmir, as İzmir Mayor Aziz Kocaoğlu, sitting at the front row, nodded sadly.

Azizoğlu’s own opening remarks included a gentle reproach to the European Union: “For years, they wanted to have us as the gatekeeper of the Middle East… We can manage small-scale migratory movements but when there is a mobility of this scale, Turkey and the EU need to work together to bring about lasting solutions.”