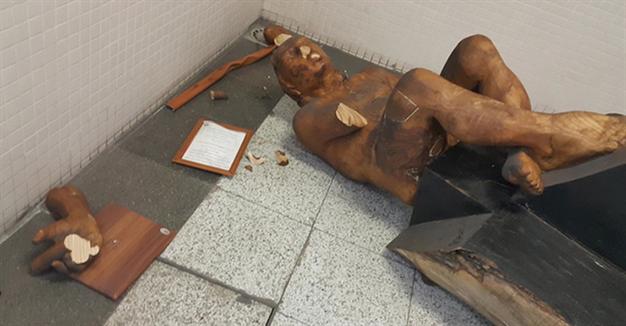 Various statues have been removed in Turkey in the last year on claims of being obscene. Two months ago, the AKP municipality in Ordu removed some female statues, while were also winners of an international competition, saying they “conflicted with public morals.”

About a month ago, a local politician from Justice and Development Party (AKP) in Izmir noticed a statue at a metro station - and kicked off a chain of events that lead to the destruction of the award-winning wooden figure.

In April, Emrullah Kavuz, a member of the municipal council for the district of Karabağlar , held an unauthorized demonstration at the metro to cover the genitals of the statue "Musician" with a white cloth. “This is a Muslim country, with its own ethics and moral values,” he said. “There are women and children who pass here every day and they do not have to see this. Shame on you, Mayor Kocaoğlu, to keep it here. If you want to look at this, you could take the statue and look at it with your family.”

Right after the demonstration, the İzmir Metro Administration made a statement, sounding somewhat surprised that the statue had suddenly become controversial after four years. “This is a statue that has been seen by hundreds of people every day. There has not been any unease expressed.”

The next step in the controversy came when a 98-years-old man claimed to have come from the province of Erzurum in eastern Turkey to cover the statue a week ago. Accompanied by Kavuz, the genitals of the statue were again covered with a cloth, this time with a chain so it could not be removed.

“Our demonstrations will continue until the mayor removes this statue that offends the public with its display of genitals,” Kavuz said.

Four days later, a local man attacked the statue and broke it to pieces. He claimed that he found the statue obscene.

Strangely enough, the attack seemed to create unity in defense of the statue. Within hours the hashtag “thestatuewillbereerected” became a trending topic, with a great number of İzmir residents and outsiders condemning the attack and asking for the wooden statue, the award winner of a 2012 international sculpture workshop, to be reinstalled as soon as possible.

Many believe that there never was a real public opposition to the statue. Given that the average seven-year-old is taken to Ephesus on school trips where s/he sees plenty of Greek statues that are naked, it is difficult to imagine that the statue in the metro will be the first genitals on a statue that children would see.

Thus, the question inevitably turned to the old debate: AKP vs Izmir.Some İzmir residents have started a petition at change.org asking the municipality to erect a statue of Priapus, a god of fertility with huge genitals, “to show the reaction of Izmir to the vandals" and "to demonstrate that Izmirians would stand-by their way of life." The petition reached some 2,000 supporters.

The İzmir Metropolitan Municipality has announced that it will repair and re-erect a wooden statue in the Aegean province which was attacked by a local man for “being obscene.”

“This cannot be the İzmir I know,” tweeted Mayor Aziz Kocaoğlu, along with a photo of the destroyed statue. “We will restore it again.”

The artist who sculpted the statue in 2012, Amancioi Gonzalez Andres, condemned the attack on his work as “a sign of regressivism in Turkey.” Speaking to daily Birgün newspaper, Andres said he would be taking part in the restoration of the statue.

The sculpture was made within the scope of the International Sculpture Competition with the theme “Mediterranean” in 2012. The İzmir Metropolitan Municipality organizes a competition every year to ensure that works of local and foreign artists are put on display in the city and the jury consists of academics, sculptors and urban experts, who later work with the municipality on where to place the statues.

Various statues have been removed in Turkey in the last year on claims of being obscene. Two months ago, the AKP municipality in Ordu  removed some female statues, while were also winners of an international competition, saying they “conflicted with public morals.”