DEAR GOVERNMENT, I’M NOT HAVING KIDS, CAN WE MOVE ON? 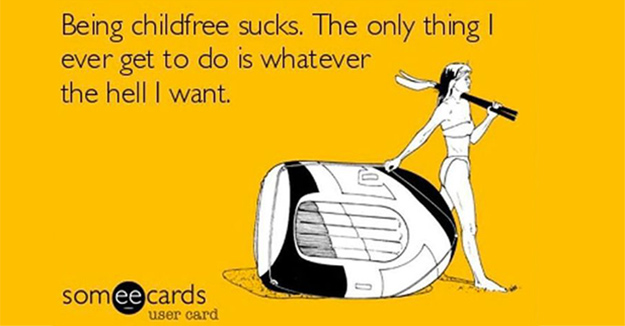 I’m not having kids, can we move on?

If Erdoğan caughs, the whole party gets a cold. His obsession and conservative views with marriage, kids and family planning are echoed all the way down, from whatever Prime Minister he has at any given time to the more youthful Erdoğan protegees in the party.

At the age of eight, I decided that I did not want kids and pets around – I just wanted lots of books. This early but firm preference did not change in the forty years that I followed.  Most anything that would interrupt my reading and needed care – babies, potted flowers, pets, cleaning – was unwelcome, though I was, admittedly, willing to make allowances for good friends, good wine and good men.. well, man.

So naturally, particular in my twenties and thirties, I did get the usual question: “So when are you planning to have kids?”

“But won’t you regret it afterwards?”

No. What I will regret is not writing a book of my reckless youth some ten years ago, but I was busy living it.

“But given your brains and creativity, wouldn’t it be a terrible waste?”

That I did not write a book? Yes. Kids? What has creativity and brains got to do with it? Some of the best mothers are totally brain-dead – particularly after their kids were born.

“It is a pity that people in our social class have only one child or none at all, whereas the uneducated and the poor multiply like rabbits.”

Whoaaa – are we on good old elitism sprinkled with fascism over here? And if you say a word about Syrian refugees giving birth “like there was no tomorrow” on Turkish territory, I think our friendship will come to an untimely end…

As if well-meaning relatives were not enough, then Turkey’s political elite joined in the chorus in the last decade.

This government policy of “have kids or else…” was led by none less than Recep Tayyip Erdoğan, the president and Turkey’s moralist-in-chief. “Motherhood is sacred” he repeated and repeated and repeated ad nauseam.  He urged married couples to have three kids and maintained that real Moslems don’t use family planning.

As any Turk and foreigner who cast an eye on Turkey knows, if Erdoğan caughs, the whole party gets a cold. His obsession with marriage, kids and family planning were echoed all the way down, from whatever Prime Minister he had at any given time to the more youthful Erdoğan protegees in the party.

Ex-PM Ahmet Davutoğlu, desperate to be elected, promised the men of Şanlıurfa “decent spouses.” Alas, he left before he could deliver “da promise.” Binali Yıldırım, his replacement, became a frequent “witness” in AKP marriages, where he advised women to be obedient “Obey and then relax” he said, sounding dangerously close to wife-beating men’s  defence at courts, which is often “I asked her several times nicely, she would not listen, then I beat her up.” Only last week, Turkey’s Youth and Sports Minister Çağatay Kılıç said that motherhood was the most sacred thing that a woman could achieve and that “men and women were not equal in all areas, although they were equal before law.”

In short, for more than a decade, whenever the Justice and Development Party folks wanted to say something nice about women, they seemed to put their foot in their mouth. From their repetitive “odes to motherhood” to advice on marriage, the ruling party of Turkey has maintained an image/vision/policy for women that puts women like me (i.e. over-educated, sarcastic, workaholic, childless, liberal b/witches)  very ill-at-ease.

But the point where they sprouting wisdom gets most irritating is their repetitive references to motherhood and equality.

Mr Kılıç, your government is far from maintaining the equality between men and women before law, and certainly not between mothers and non-mothers. On the contrary, your government is enforcing gender bias by the books it uses at schools; in political statements you AKP folks make and in your reluctance to pass laws that would protect women against harassment and not-so-glass ceilings.

Stop referring to sacredness of motherhood – refer to the human rights of women, all women, whether we are mothers or not. You have greatly and singularly failed in your duty to make life safe for women on the streets. To add insult and injury, your party-men tell us how to dress and actually Justify/invite violence against women who are not wearing conservative clothes.

Before advocating more children, reform the education system and give children the right to a universal, secular and free education.

Give the next generation a fair chance to find jobs and advance in their jobs based on accomplishment, not on your fickle sense of loyalty.

Leave me alone to decide whether I want to have kids. I am less than interested in your idea of sacredness.

You do your business of governance and provide opportunities for the next generation.