EMBRACING THE SEA THROUGH THE SAILS OF BUREN 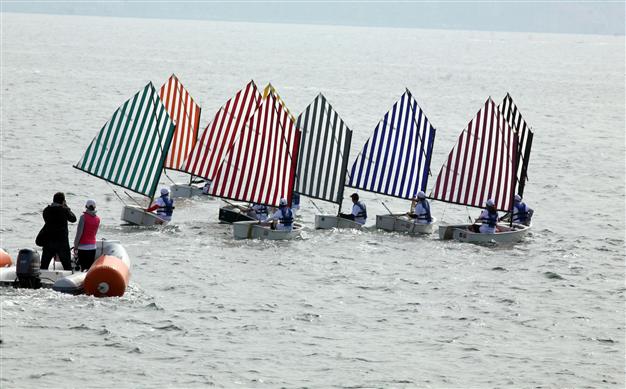 Embracing the sea through the sails of Buren

It is one of the last sunny days of mid-October, with tough winds over the Aegean Sea at the port of Karşıyaka, İzmir. Nine sailboats, which take off from the Karşıyaka port to race throughout the İzmir Gulf are grateful for the wind, though one of the young contestants complains to his mate that the unpredictable wind will make it difficult for them to follow the carefully choreographed route.

The sails of the boats all display brightly-colored stripes that are 8.7 cm wide - the signature of French conceptual artist Daniel Buren. Buren, the creator of “Toile/Voile Voile/Toile” (Canvas/Sail Sail/Canvas) Project, is on shore, along with the organizers of “Egeart,” an annual art festival organized by Ege University for the last six years.

Do the candy-striped sails appear irrelevant at a time of mourning, bloodshed and upcoming elections? Clearly not, according to Candeğer Yılmaz, the rector of Ege University who introduced Buren to a conference by a carefully-worded statement expressing hope for change: “[Buren’s work shows us that] a line which we think unchangeable can vary with time and space. We have lived through a major tragedy with the Ankara bombing on Oct. 10. We need to stop mourning. Although we will not forget, we need to continue the line of life.”

Described as one of the most important conceptual artists alive, Buren is known for putting ultra-modern candy-striped black-and-white columns of different heights, known as the “columns of Buren” in the heart of Paris, right in the 17th century baroque splendor of the Palais-Royale, opposite the Louvre. Buren ironically refers to the “tourists” who have turned his famed columns and fountain into a wishing well.

The French artist’s “Toile/Voile” was created as early as the mid-1970’s and displayed in various cities from Geneva to Tel Aviv. The idea is to use the sail as a canvas and water as the exhibition space: a piece consisting of boat races followed by museum displays of sail-canvasses. Nine boats are fitted with striped canvas sails (white with red, blue, yellow, green or brown stripes).  Following the boat race, the sails are exhibited in an exhibition hall in the city in the order they cross the finishing line. In the case of İzmir, the exhibition took place in Havagazı Fabrikası, the city’s gas factory, built by the French150 years ago.

Buren has been in the Aegean metropolis some fifteen years and said he found the city had “much grown.”

As if to confirm his reputation of being a perfectionist, he waved aside the “official dinner and program” to devote his time to work on the project.

The city of sails

The decision to host the Canvas/Sails exhibition is no incident. According to a survey carried by the city’s chamber of commerce, İZTO, in 2007, “sea and seafront” are the first things that come to the minds of 14.7 percent of Turks when they are asked to associate a word with the city (7.8 percent said girls – as İzmirian girls are known for their beauty and poise...)

The project also complements the Aegean port city’s “great project,” “İzmir re-embraces the Sea,” which aims to vamp up the city’s 40-km seafront with public squares, statues, bicycle paths and uninterrupted pedestrian paths by the sea and docks.

“We wanted to bring this project to İzmir because we think that it marked a mix of culture, sport and sea,” said Serpil Utku, the organizer of Egeart. “Buren is one of the greatest artists alive and the videos we will make of this exhibition will be a major promotion of İzmir.”

The artist as a rebel

Buren, in his late 70s, is no stranger to the Turkish art scene. Although this is his first exhibition in İzmir, Buren’s Voile/Toile was exhibited in Istanbul in 2011, when the sails were exhibited in the Rahmi Koç museum after a regatta by the Moda Sailing Club.

He is also no stranger to political controversy: the black-and-white “columns of Buren” in Paris’s most classical setting, a major project of François Mitterrand, France’s last great socialist president, and his Culture Minister Jack Lang, was firmly opposed by the right-wing, particularly Jacques Chirac, who was mayor of Paris at the time. “The stupidity of politics delayed my project for months,” Buren said.

He also talked about his brief stint in jail, when his efforts to plaster his signature stripes to walls of the city got him arrested in Berne, Switzerland. “Life is never safe for an artist, not then, not today,” said the great artist. Right city and right country to draw applause!