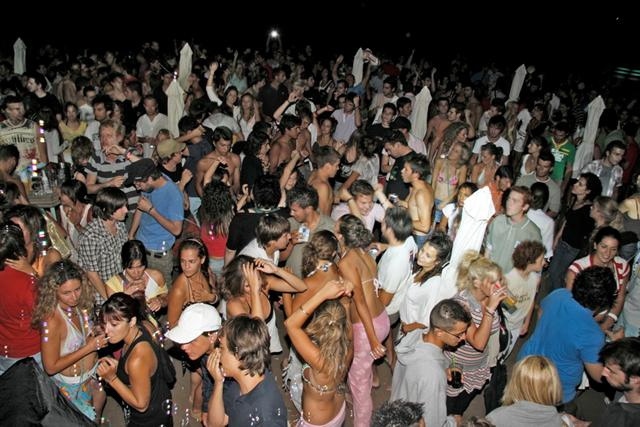 The concern in political developments is written on the bronzed faces; the eagerness to fight for our values and civil disobedience are all evident in the Facebook and Twitter messages; fears of economic instability are reflected in the 100-lira (half of last year) tips to the beach valets and sorrows are drowned in glasses of Mojito and Blush.

This is life on the snazzy Aegean beaches as the blazing summer heat reaches its last legs of glory and the comfortably-off start counting the days to head back to the city. In the meantime, the 750-lira-a-day beach huts are filled with celebrities; golden youth whose chests are sprawled with “faith” or “fun” or any other relevant f-words dance in the after-parties and the typical night consists of beer at Otto, followed by vodka and energy drinks at Dusk, finished by tripe soup…

This summer life, aptly described in this season’s top song, Taylor Swift’s “Blank Space,” takes place mere miles away from the bays of Çeşme and Alaçatı, the popular holiday resorts near İzmir, where Syrian refugees are sleeping before they head forGreece in the dark.

So how come Turkey’s golden youth – and the diamond-studded older ones – are partying so hard as Turkey’s name becomes synonymous with instability in international headlines?

I asked the question to the five noisy university students who were sun tanning beside me on the season’s favorite beach club. Students from Bilgi University, they are staying at “a friend’s house” for the next two weeks. No, this is not their first time here, but it is by far the longest time they stayed here because “Çeşme kicked Bodrum’s behind” in terms of music, fun, the “innovation” in bars and the celebrities who prefer to come here.

“It is not like we do not care what is happening in Turkey,” said one. “I sure keep up-to-date. I, like, check my FB and Instagram every hour to see what is going on.”

“I am, like, not sharing any photos of drinks, beaches, drunken friends or pretty girls because there are so many deaths,” said the other, persuaded that this is the height of political sensitivity. “I have seen so many actors here but have not even put their photos on Instagram.”

Further down the fancy beach, a huge group of men and women in their early forties are downing Blush. My guess is that they are the suave Istanbulites on a holiday. Some celebrity must be among them, given that they are given a special place in the beach. The “Beach valets” can appraise your income, your body weight index and your coverage/worth in the media with a single glance.

Various sounds rise from the group: The ruffling of newspapers against the wind, the fast moving fingers that share views on twitter, the smell of 30+ sun block and the quick arguments in voices slightly slurred by alcohol at noon. Wind brings the words of a meaty man, clearly the Alpha male in the group: “The prices here are scandalous. This is the last time we come to Çeşme, I tell you that. Nice or Cannes would have been cheaper – but if the dollar and euro continue to rise, I do not know.”

Another person in the group calls for another bottle of the mediocre Blush, sold at four times the price at the supermarket. More nagging on prices continues with some home-made analysis of politics thrown in.

My companions, true İzmirians who have been coming to this beach for the last twenty years, are quick to point out that “people like these” are spoiling the Aegean coasts. “Ever since Zeynep Tunuslu discovered Alaçatı, the prices have been going up. The Istanbulites and the Ankarians have started coming here and the place has been doomed. The places we enjoyed some ten years ago have become too loud, too crowded and far too expensive. I can’t wait until September when they pack up and leave.”

The attitude is totally in line with the overall İzmirian philosophy: Anything that is bad in Turkey is the fault of the non-İzmirians, who, out of ignorance and misplaced energy, are now spoiling the idyllic paradise of Homeros where the work ends on Thursday afternoon, not to be picked up until Monday at noon.

I diplomatically refrain from reminding them that they have no problem renting their family houses in Çeşme at exorbitant prices and selling their land in Alaçatı to contracting companies that will build still more Scandinavian-looking cottages to sell to still  more Istanbulites… and ah, that their İzmir born-and-raised offspring are the main crowd that is party hopping!

But so much for the İzmirian hopes that the tourists from Istanbul will “pack up and go by Sept. 1” or “just have their fill from Alaçatı and simply not return next year.” According to contractors, Alaçatı grows by 30 percent each year – both in terms of houses built and the price of those houses. “It has become a year-round residence and people who are tired of the cosmopolitan life resettle here,” said the owner of a local building company.

And the vacation-boom will not stop. Çeşme’s mayor already said tourism investments have increased by 30 percent in the area by and more – such as two thermal hotels – are on the way.

Consequently, retailers rush in where the business is. This year, shiny new markets of national chains opened. Discounters such as BIM and A101 are there, as well as a very posh Macrocenter in Alaçatı where various Blush and Champagne brands grace the shelves. Alaçatı tourism managers, beach club owners and bartenders were not among the bunch weeping on profits lost in the sector this year.

So let us have no illusions on humanity: Even the strategic-minded/politically aware/sensitive souls who deeply worry about the world/country/economy/early elections/Kurdish peace process are capable of doing that while they are on the beach.