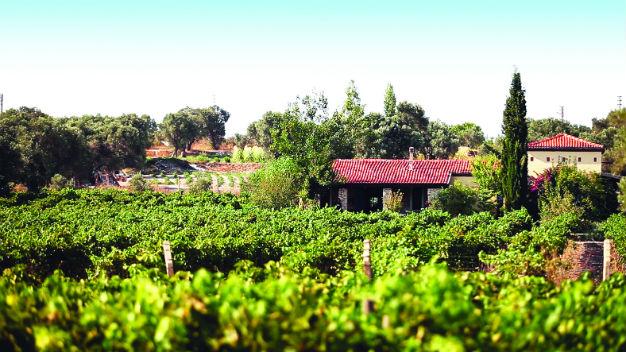 It is a sunny but slightly chilly spring day in İzmir – one that you know will not last because the hot summer will soon appear. But as it is, the Aegeans and the guests of spring would rather go out in search of green fields rather than the blue of the sea.

Our small group of eight start the route mid-morning in anticipation of a bombardment of information on “the new wines of the old lands” followed by an equally dense wine tasting. The visitors from the United States, an İzmirian woman married to a truly international man, are particularly eager, as they have seen the New York Times describe Urla vineyards, USCA and Urliçe, as one of the 52 destinations to go to in 2016.

The Urla wine route consists of half a dozen vineyards that comes of different sizes: from the vast, Urla Wines, with its large caves and professional guides to introduce you its award-winning wines, to the small, rustic charm of Urliçe, with a porch that opens up onto the plantations.

But rather than the cut-throat rivalry ones sees in other sectors, the vineyards have decided to join forces and establish the “Urla Wine Producers and Viticulture Association” – now the main voice of the “Urla Wine Route,” which offers the visitor a tour of two days to see several vineyards. The group also managed to obtain funding from the İzmir Development Agency (İZKA) for the promotion of the route.

The owners of the vineyards are quick to point out that the peninsula has been a traditional wine-producer since 1000 B.C. Conquest-minded Persians, the commercially inclined Lydians and the many owners of the peninsula kept up the tradition of wine making, eventually exporting it to the rest of the world. When non-Muslims started moving away, the vineyards were abandoned and the local producers of grapes started selling the grapes rather than continue with the local production of wine.

Then, about a decade ago, the peninsula witnessed a second revival. A couple, Bilge and Reha Öğünlü, decided to return from Ann Arbor, Michigan, to settle in Urla, take over  Bilge’s mother’s vineyards and start making wine under the name “Urliçe.”

Urliçe was quickly followed by Urla Wines of Can Ortabaş, an İzmir businessman who established a very sophisticated winery, complete with gravity flow techniques, stainless steel tanks and a mixture of American and French oak barrels.

And then there were many… Two couples, dentists and lawyers, decided to escape the city life and establish their brand, USCA. Nearby, MMG Wines was founded by brain surgeon Professor Metin Güler, who joined forces with his son and daughter. The Mozaik and Limanbey vineyards joined in.

“Some of us were locals who made a comeback, others were newcomers. What united us was our desire to demonstrate that we can revive ancient grapes, get new ones and produce world-class wines,” Bilge Bengisu Öğünlü told the Hürriyet Daily News in an interview. “We learned from each other’s experience, we helped each other with paperwork and obtaining permits. We became friends and partners. We are a handful of people who like working together.”

But it was not simply comradeship, sunsets and sipping wine together. “When we started, there was the firm belief that only certain grapes can be raised here, because the climate was, allegedly, too hot. But the microclimate in the peninsula is a particular one: it is windy and the evenings are cool. It is a bit like Sicily – warm but with the influence of the winds that come from the sea. Many people were convinced that it was not a good climate for Cabernet Sauvignon. They were wrong.  Not only did we grow it, but our Cabernet Sauvignon Reserve 2009 received two awards; one is called “Best Young Red Dry Wine.”

Urla Wines revived ancient grapes such as Gaidoura, a rare grape that is produced also in the Greek islands, and Urla Karası (Noir d’Urla), a berry-colored grape that blends well with Nero d’Avola, one of the most important red wine grapes in Sicily. Another antique grape of the region, Foça Karası (Noir de Focai), is grown and bottled by USCA Wines under its “Sonnet” label. MMG, meanwhile, has created its “Şatomet” label with its dry Muscat of Bornova. The new varieties and hybrids have led to many international awards, from Mahrem Petit Verdot’s (Mozaik) bronze medal at the International Wine Challenge to Urla Nexus’ bronze medal in the Sommelier Wine Awards.

Bengisu Öğünlü believes that there are more to the vineyards than great sips of wine. “The agro-tourism will liven up the whole region – it will enable a sustainable, green environment to pass from generation to generation. It will also bring prosperity to Urla,” she said.

We, the visitors, relaxed and tipsy, couldn’t have agreed more.